These are the ten primary emotions as I learned them in my DBT treatment program this summer.

Knowing more information about them helps me understand what’s going on inside me and what I need to do to resolve the situation, if anything (see the flowchart under Emotion Regulation in the DBT Skills Summary). 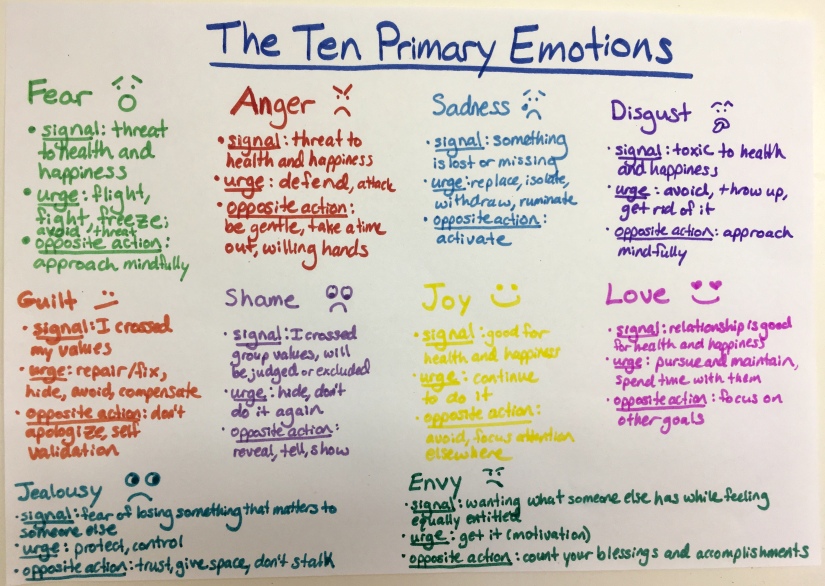 What’s this opposite action thing?

Opposite action is a DBT skill I really like and have been using a lot.

Once I’ve identified what emotion I’m feeling and validated myself, I determine whether it’s justified or unjustified and if the emotion is helping me to be effective in this moment.

If the emotion is unjustified, then it’s time to use opposite action! Opposite action is doing the opposite of the urge an unjustified emotion is giving me. I’ve been using opposite action a lot for shame. When I feel shame, my urge is to hide. But, if I 1) identify that I am feeling shame and 2) find that it’s unjustified, then I know I need to use opposite action. Instead of hiding my face, getting squirmy, curling up, running away, talking quietly, and not speaking, I do the opposite. I stay where I am. I sit on my hands so that I can’t cover myself up with them. I keep talking about whatever thing I think is “weird” but which really isn’t. I put myself out there. It is very uncomfortable, but it helps the shame go away.

Instead of wallowing in my (unjustified) feelings, I react in a more effective way. Yay opposite action!

Understanding emotions has been really helpful to me.

And other coping skills:

View all posts by suninthespring

9 thoughts on “The Emotions and Opposite Action”

Follow Something over Nothing on WordPress.com
Join 167 other followers